The scene with long queues and lots of elderly people in the post office is repeated every month. More than a dozen people stand there in a queue and wait for their pensions. Most of them receive a sum that is way below €400. The money is paid to them in cash, and counted out in public before being handed over. The post office clerk counts the money out to the pensioner: ten, 20, 30 euros, one hundred, two hundred, three hundred euros, and then the money is stuck in the envelope which had previously contained the payment slip from social security.

There are close to 3.6 million pensioners living in Portugal, of whom 613,000 are former civil servants, who receive their pensions from the civil service pension fund (the Caixa Geral de Aposentações). Added to the other 2,007,120 so-called normal pensioners are 258,488 disability pensioners and 718,246 pensioners who receive a so-called survival pension (sobrevivência). In 2015, there were 408,424 pensioners living in Lisbon, 304,433 in Porto and 157,386 in Setúbal. The majority of them are women. At the start of 2015, exactly 1,919,403 pensioners were living off pensions of less than €364 per month. Can people lead a dignified life with that amount?
With a population of ten million, it is a real challenge for the State and municipalities to provide for around 3.6 million pensioners. People today are living longer, becoming older, and drawing a pension for longer and longer, not to mention the cost of medicine. Is Portugal able and willing to afford an unconditional basic income of €500 per month per adult taxpayer in these circumstances?
Facing the army of passive pensioners are 4,624,902 active households, in which people work and pay direct and indirect taxes and social security contributions to the State. 3,034,586 households, i.e. 65.6 percent of all households, paid tax on an income of less than €10,000 in 2015 and thus contribute only four percent of the revenue from income tax (€338 million). But at the upper end, there are, from the statistical point of view, 2,343 households that pay tax on more than €250,000 per year. Although they comprise only 0.1 percent of the working population, they are responsible for 8.3 percent of income tax (€713 million). So, there’s no shortage of money in the country.

When studying the social security figures, you have to wade through two weighty tomes of 720 pages. In the two reports by Social Security for the year 2015, revenue of €24.5 billion is listed (p. 53). Of that, €9.5 billion came from the public sector. Expenditure amounted to almost €24 billion. This figure includes €240 million of staffing costs within the social security authority itself (p. 216). The surplus in 2015 amounted to almost €494 million.
In 2015, gross domestic product (GDP) per head in Portugal was approximately €18,700. By comparison, GDP per head in Germany was €38,600. If the Swiss economist Professor Thomas Straubhaar thinks it is possible to finance a UBI of €1,000 in Germany, it can be assumed that Portugal could afford a social system with a UBI of €500, provided there is the political will.

The basic income effectively and sustainably prevents income poverty. It frees people from existential fear, prevents poverty in old age and empowers young people to take the decision themselves to learn a profession that gives them meaning. It promotes understanding and tax compliance, and, contrary to the fears of many that it would encourage laziness and indolence, the UBI motivates people to combine work and family life. If parents can take greater care of their children, and the children can do more for their sick and elderly parents later on, this strengthens a dignified life and the social cohesion of families. No one has to stand in a queue any more, and wait for handouts from the slow workings of Social Security.

Uwe Heitkamp, 53 years old, started working after university in daily newspapers and from 1984 on in public tv broadcasting companies such as WDR (Collogne), NDR (Hamburg), SDR (Stuttgart/Baden-Baden) in the ARD (first programme), wrote several books and directed the cinema movie about the anti nuclear movement in Germany in 1986 (Wackersdorf). After emigration in 1990 he founded 1995 the trilingual weekly printed newspaper “Algarve123” and later the online edition www.algarve123.com. Heitkamp lives for 25 year in Monchique, Portugal. He loves mountain hiking and swimming in streams and lakes, writes and tells stories of success from people and their sustainable relationship between ecology and economy. His actual film “Revolutionary Roads” tells the 60 minute story of a long walk crossing Portugal. 10 rural people paint a picture of their lives in the hills of the serra and the hinterland. The film captures profound impressions of natural beauty and human life. Along which path is the future of Portugal to be found? (subscribe to ECO123 und watch the documentary in the Mediatec)

Previous Well roared, lion!
Next Chickpeas in the room? 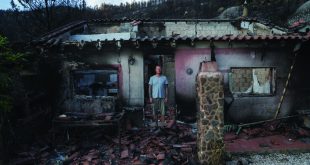 What did you lose and what did you gain from the fire? The Karuna Retreat …

This site uses Akismet to reduce spam. Learn how your comment data is processed.

Livro de reclamações
Copyright - ECO123 - 2021 Todos os direitos
"Thanks, for Subscribe with us!"

We will not spam you